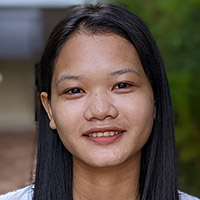 Sarom became a Scholarship student in April 2015, when she was in grade 7. Born on 16 July 2001, in Prey Touch Village, she graduated from Preah Monivong High School in Battambang. Currently she is studying at Build Bright University in Phnom Penh, with a major in human resources. She has a job at a cinema complex working in their Human Resources Department. After she graduates from university, Sarom wants to continue working in human resources. She lives with her brother, Sopheus.  In addition to Sopheus, she has another brother and a sister. Her brother, Sitha, manages our English language program.  Her English is excellent. Sarom's parents told us they want their daughter "to have high education with bright future, to avoid difficulties and poverty."