From Kicking Coconuts to League Competition

Whether you call it football or soccer, kids in our 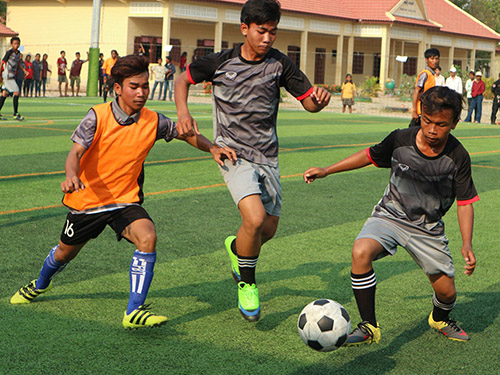 village love it, even with a ripe coconut for a ball and for a field, any rocky, ant-ridden, but relatively level ground, they can find. They’d play barefooted, then hobble home with sore, bleeding feet.  Their dream --  uniforms, proper shoes, a real soccer ball and a soccer stadium filled with cheering crowds.

Thanks to the generosity of Tim Sykes and other donors, in 2017 the Cambodian Village Fund and community leaders opened the Tim Sykes Stadium, complete with floodlights and artificial turf.  It quickly became a source of great pride for all the villages in Prey Touch Commune.

However, the kids still needed uniforms, shoes, balls, practice fields, instruction on game rules and, of course, some team competition.

With additional donations, we were able to work with a Cambodian nonprofit organization, the Sports and Leadership Training Academy, to conduct workshops for teachers and students on rules, training, and how to form a soccer league. The Tim League was born.  Soon we had six primary school teams. 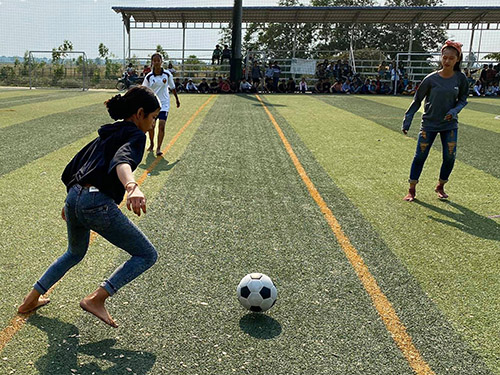 Some American students got in on the game too. Students and teachers from San Diego’s Francis Parker School joined us on a Cambodia trip and decided they would sponsor the soccer program by providing practice fields, uniforms and equipment for the primary school teams.

Next challenge: sustainability.  Our goal is to make the soccer league self-sustaining.  Local officials established a council to oversee the stadium and soccer league.  To cover stadium costs for maintenance, electricity, new nets and artificial turf replacement every five to seven years, the council established a charge for each stadium use - about $3 - $4 for student teams.  Sounds small but it helps supplement donated funds so these kids have a safe place to practice, compete and learn about leadership, teamwork, decision-making, and sportsmanship – and sportswomenship – while developing agility and coordination.

Who knows, one day a great soccer player may come from Prey Touch Commune.

Won’t you join our team?

The families in rural Cambodia are very poor. Many cannot afford to buy uniforms for their children.  Most schools have very limited resources for equipment like balls and nets.  But maybe it’s within your reach to join us by sponsoring one or more children, an entire team or even a whole school.  We’d love to see your name on a team’s jersey and it’s easy to do: 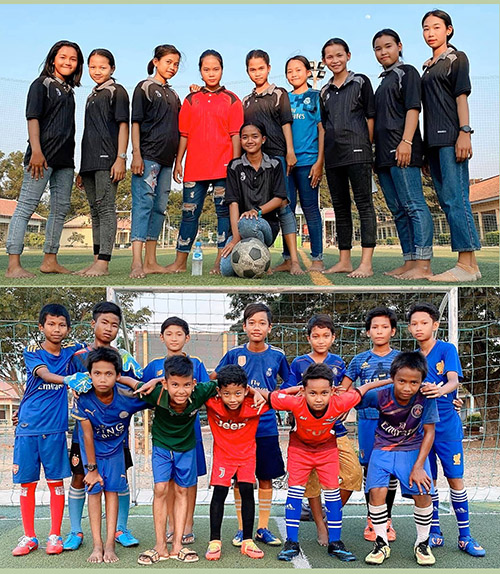 Your contribution goes directly to a player to pay for a jersey, shorts, shoes, and pads.

Your contribution pays for the cost of an entire team, including 10 uniforms consisting of a jersey, shorts, shoes, socks, balls and gloves.

Your name will be on the jerseys of each player and you will have a banner at the Tim Sykes Stadium.

Your contribution supports the football program for one of the primary schools.  It will pay for uniforms, shoes, socks, pads, goalkeeper gloves, cone, practice jerseys, net and crossbar net.

Your name will be on the jersey of each player and on two banners -- one placed at the Tim Sykes Stadium and the other at the school’s practice field.

You can make your donation with your credit card or PayPal account.  Simply click the "Donate" button below.  Even better, after you click the button, check the box "Make this a monthly donation" and your support will continue every month.

(Please note on your check that your donation is for the “Youth Soccer” program.)

On behalf of the kids, the school staff, the villages and our future Prey Touch Commune soccer stars, we thank you in advance for your generosity!

If you can dream it, you can do it.