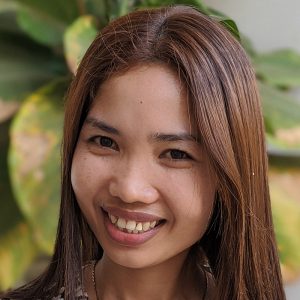 Souerth became a Scholarship student in September 2012, after she graduated from high school. Born on August 7, 1993 in Kaun Khlong village, Souerth has an older brother who is a university graduate, an older sister and a younger sister. Her mother and father are farmers. Souerth graduated from Sangke High School in 2012 and received a Bachelor's degree in Marketing in 2016 from the University of Management and Economics.  She works for Hagar International, an NGO that helps women and children that have escaped from sexual abuse and human trafficking. Her job title is Case Management and Economic Empowerment Officer.